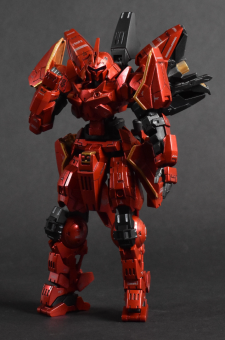 Created in secrecy to combat the Earth Alliance. With the sudden appearance of the Maxion Army, this forced the early deployment of the Unit. The Nakozu uses High Output Thrusters and an Experimental Drone System to attack multiple threats at once. Thermal buildup must be discharged via vents on the shoulders and waist. The exhaust gives off a golden dust-like hue.

The NVX-06 is outfitted with 3 Non-AI Drones that can encircle the Unit when deployed.

It's also has 3 separate High Output Thrusters located on its torso.

The primary weapon of choice is the Carbon Strike Rifle. This rifle isnt standard to what the Byron normally make. This weapon fires a kinetic projectile rather than energy. This is because the Earth Alliance has created an effective shield severely reducing the effects of energy based weapons.