THIS IS A WORK IN PROGRESS. THE INFORMATION IS MOSTLY UP-TO-DATE, BUT NEW VERSIONS OF THE DATASHEETS NEED TO BE UPLOADED.

Once you have downloaded the correct datasheet, you will need to document all of your Core Sections, Weapons, Equipment, Mounted Weapons, Shields, Systems, and Mods. It may look like a lot but we will break everything down into 4 segments: 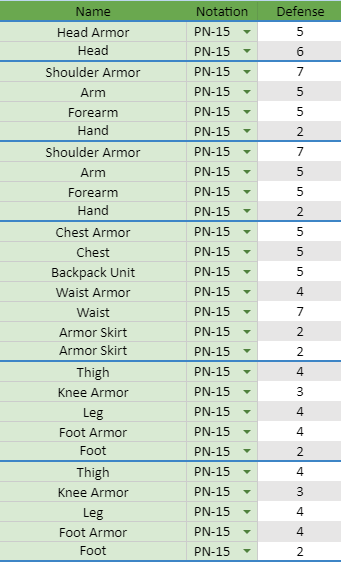 Portanova Core Parts. Also shows how each one is separated.

Core Parts are each individual piece that makes up the Unit. When you combine Core Parts into limbs, heads, torsos, etc, these are considered Core Sections. Weapon and Equipment parts can be considered Core Parts but only under specific circumstances (See CT Tag in Core Rules).

First must identify how many Core Sections your Unit has and what they are. Most Units have the Head, Left Arm, Right Arm, Torso, Left Leg, and Right Leg as Core Sections. Feel free to use this as a starting point. You are only allowed 10 slots for Core Sections so if you run out of slots, you may need to combine limbs.

Once you have annotated the Core Sections, you will then need to determine the Max Defense of each one. To do this, you will need to open up the Parts List. There is a tab with the name Core Section Calculator. Here is where you will add each Core Part that makes up a single section. Follow the directions on the sheet for further information.

On the top, you see 3 titles: Name, Notation, and Defense. In the Name column, you will put down the name of the specific part listed on your model. Most parts share the same names, so in order to differentiate which part belongs to which model, we use specific model Notations.

Notations are broken down into what packs they come from and which unit they belong to. For example, PN-15 is the PortaNova-15. The Weapons Pack 1 for the Portanova is W1-15. Similarly, the Alto-17 is AL-17. The Weapons Pack for Alto is W1-17.

The Defense values are determined by which Unit is being used and what its purpose is. In this column, this is done automatically once the Name and Notation are added. The Defense value will only populate if the Name and Notation match exactly! If a value fails to auto-populate, check the spelling. If it still does not work, notify a Developer on the discord then type the value in yourself.

There are multiple parts of the same name. This is because most Units are symmetrical and use the same parts for both sides. This organizational system helps with the design of asymmetrical Units.

The image on the right is an example of what a standard out-of-the-box Portanova-15 looks like when each piece is broken down and added to the Core Parts List. Take note of how there are multiple of the same pieces (arm, forearm, hand, etc). This is because each Unit has two arms and two legs.

Take note of how the parts are separated by the blue lines. This shows how the Core Parts are divided into respective Core Section (head, arm, arm, torso, leg, leg). Each individual part provides Defense to the entire Unit. We will come back to this later.

On the Parts List, there is a tab with the name Weapon/Equipment Calculator with 20 open rows for your parts. On the top row of this section, similar to the Core Parts, you see Name and Notation but this time there are more columns: 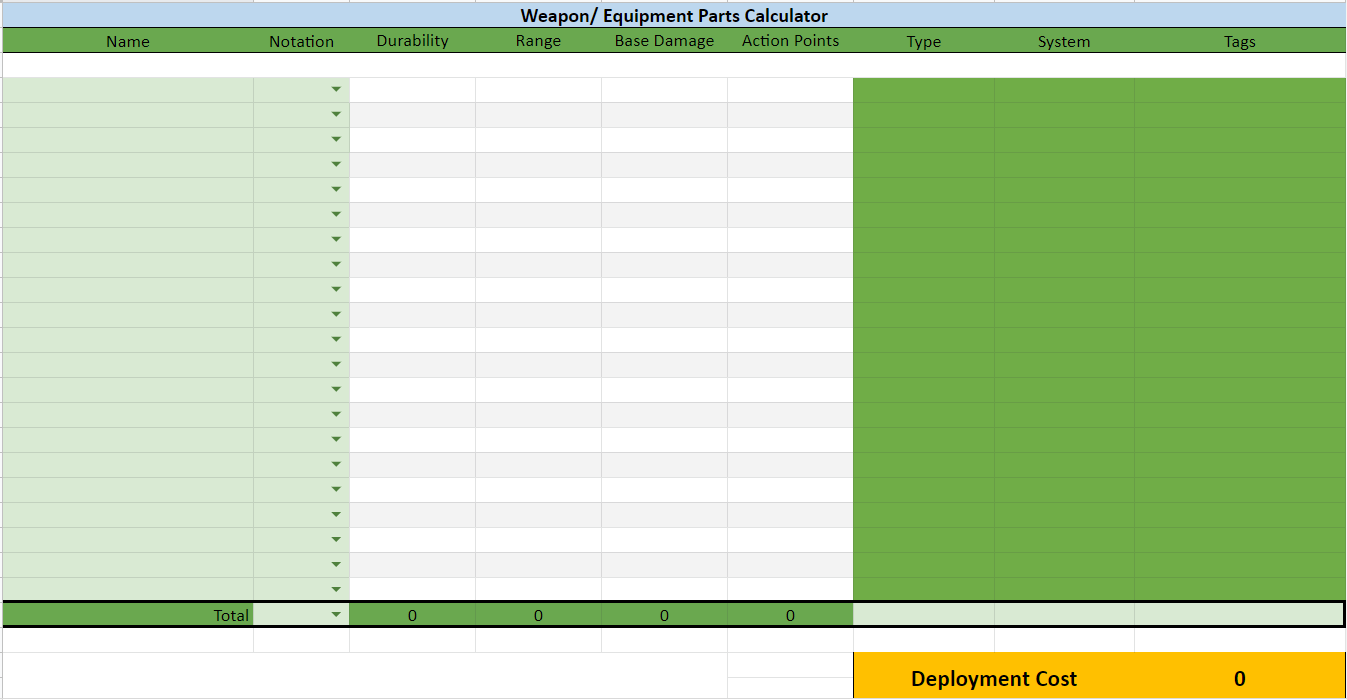 Located in the bottom row of this section is the combined total of each piece's stat contribution to show the overall Weapon/Equipment stats.

You need to type the Name and add the correct Notation. The sheet will auto-populate the stats if the two match the Name on the Parts List. Once all of the separate parts are added, the totals will be automatically calculated into the total row. This is the overall Weapon stats for each of the four stat types.

In order to win the war, your Unit is going to need Weapons. Any Weapon you create can be used. Weapons are broken down into 2 categories: Ranged Combat Weapons & Close Combat. Each category has two types: Kinetic and Energy.

Once all of the correct parts have been added, the bottom row will show the weapons total stats. These stats will be transferred to the Weapon/Equipment Stats section of the Datasheet, which will be explained in another section.

2-Handed Weapons: In the parts description on the Parts List, it will say if that specific part is 2-handed or not. When a part is labeled as 2-handed, the Unit using it must use two hands to properly wield it. If two hands are not used, the Weapon's total AP is raised by 3. This requirement doesn't affect mounted Weapons.

When physically building your Weapons, even if not every piece is used on the model itself, you will still add it to the list.

This is also explained in the Core Rules under section "5.3.4 - Weapons/Equipment."

When creating a Unit, you might have multiple copies of the same Weapon attached. This is called Weapon Redundancy or WR for short. A Weapon with multiple copies reduces its AP cost by 1 for every copy after the first, to a maximum reduction of 4 AP. A weapon cannot be reduced past half of its initial AP cost (rounded up). If the reduction would bring the AP cost to 2 or lower, the weapons AP cost is reduced to 2, and the damage is increased by 1 for every 2 copies of the same weapon available.

This means that if a player has 4 total missile pods on their Unit, a single attack will do 12Dmg/3AP instead of 12Dmg/6AP.

This means if a player has 4 total pistols on their Unit, a single attack will do 5Dmg/2AP instead of 3Dmg/2AP.

When a Unit loses one of those Weapons in battle, they do not keep the same stats. WR only applies to how many Weapons that Unit has that are STILL in play. If we use the above examples:

Since two were destroyed, the AP increases to 5.

Since two were destroyed, the Damage is reduced by 2.

This system is meant to be simple enough to make stat calculation changes in the middle of combat.

Similar to how Weapons are made, Equipment is created and added to the Datasheet.

What would be considered Equipment?

Most parts will be labeled as Equipment in its description in the Parts List. The majority of these provide some kind of ability that may be added to your Unit to give it an advantage.

When adding thrusters to the list, it is important to group them into a single section based on their location. For example, the Alto Flight type has wings and thrusters connected to its torso VIA the backpack unit (backpack units are considered part of the torso). These will be broken down into two sections: a left-wing section and a right-wing section. Each section is made up of exactly the same parts so you only have to fill out the section once. However, you do need to change the number in the box on the right side of the name from 1 to 2 to indicate that there are 2 wing Sections.

Please note that even if you only have one piece that is considered Equipment (Smoke Discharger, Radar Dish, etc.), you still need to add it to this section.

Once you successfully add the pieces to the Equipment list, you can then add their total Durability to the Weapon/Equipment Stats section.

There are 6 main sections on the Datasheet for your Unit. Each one is meant to organize the Abilities, Weapons, and Equipment you've made in the past sections for easy and quick access/alteration while in the middle of a battle. The 7th section shows Units' basic attacks.

[WILL NEED TO REUPLOAD TABLE PICTURES UPDATED WITH 'BASE DAMAGE']

Just like with the Weapons/Equipment List, the top row of each section shows Name, Durability, Range, Base Damage, & AP with the exception of the SMTs and Basic Attacks sections.

Under the SMTs Section, you will see the columns Type & Description:

In the image above, you will see the Weapon/Equipment Stats of a standard Alto Flight Type. The out-of-the-box kit does not have any Weapons to put in the Weapons section or Shields to put in the Shields section, so we will just be looking at the sections that have information.

Remember: Your Unit cannot use Weapons that it doesn't have equipped or mounted, so it's recommended to begin the battle with the Weapon you want to use first in its hand(s) or mounted.

[NEED TO CHANGE "STAT REDUCTION" LANGUAGE IN THIS IMAGE] Alongside Weapon/Equipment Stats, you will determine a Unit's Defense with the help of this table. Starting from the top, you will see 3 columns:

The image below shows what a standard out-of-the-box Portanova Unit's Core Stats look like. [IMAGE NEEDS TO REFLECT CHANGING LANGUAGE FOR 'STAT REDUCTION' AS WELL]

Starting from the top; You will see that the Unit is broken down into 6 sections. Each of those sections has a value based on the Core Parts section. Every part that makes up a section has its Defense added together and put in the Max Defense column. While playing, the Current Defense column is where any changes to that section's Max Defense will be recorded. Please note: this area won't always look like this. Custom Units may have more than two arms, legs, heads, etc. so it's important for the player to decide the best way to divide up their Unit.

For the Pilot Rank/A.I. Processor, we see that this Pilot's rank is 4. This means that the Unit gains more Modifiers at a higher Deployment Cost. We will come back to this.

Total defense is automatically calculated from your Core Parts List. Here, the Thruster Durability Total is 0. This is because this Unit does not have any Thrusters.

For its Core Type, the Unit is a Portanova. As stated before, Core Types are based on the Torso Part of the Unit. Players must choose the correct Core Type for their Units. Classifications are based on a Unit's Total Defense, while Base AP is based on a Unit's Classification. Both of these calculations are done automatically. If you are using the printed Datasheet, you will find all of the information needed to do these manually paired with the sheet.

Base Stats are generated by Core Type. These are generated automatically and are the highest each Stat can be (Remember: The higher the number, the worse the Stat is). Here you see that the Base Stats are 7/9/7. Modified Stats are a Unit's Base Stats AFTER the player has factored in changes from the Modifiers section. In the Modifiers section, the Pilot Rank grants 3 stat reductions. This means that we have 3 points to [ADD/SUBTRACT TO/FROM] any of the Unit's Stats. On this Datasheet, the player decided that the Unit is going to be well-rounded in Accuracy and Assault, but there is no change to its Evasion. [THIS SECTION ALSO APPEARS TO NEED UPDATED TO REFLECT STAT REDUCTION TERMINOLOGY]